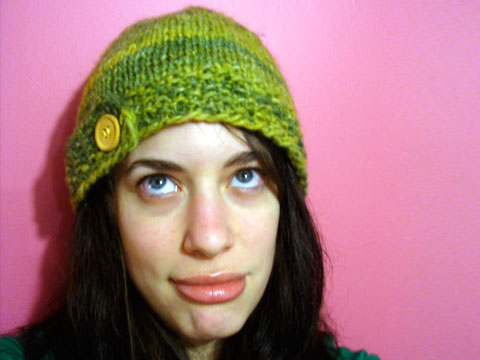 Hello! This is the Banana Republic Hat for my friend Chantal’s birthday. Chantal looks gorgeous in green. As I was knitting it I felt like I had fiberglass filaments in my eyes and nose. I’m not allergic to anything so I don’t know what’s up with that. I would hate for this to make my friend uncomfortable but nobody mentioned anything on Ravelry and people were even making stuffed bears out of this - stuffed bears FOR CHILDREN - so I’m hoping it’s just me.

I met Chantal on the first day of our summer-long Organic Chemistry intesive. She was my best friend from the first day to the last. Two weeks after I met her, Berroco announced their fall preview and there was a sweater named Chantal. That’s my first Chantal knitting story, and this blog post is my second.

I used the three patterns available and just combined them, kind of like making a baby with three parents. I’m not so happy with the unevenness of my stitches (I was using my mutilated 10s) but nowadays manufacturers make machine-knits look like they have character so it’s not an issue.

This is the “From Now On” part of the post.
1. I had to thread the “base” of the hat with some leftover yarn to give it some structure because after blocking it just lost all its shape. I blocked this hat to even up the decrease pattern on top because it always bunches up when I do it and I think from now on I’m going to alternate a row of stockinette in with each decrease row. 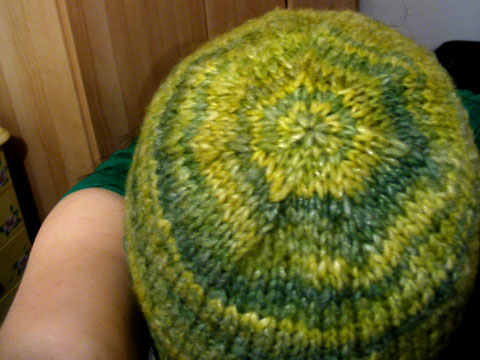 Pretty decreases that happened all too suddenly. 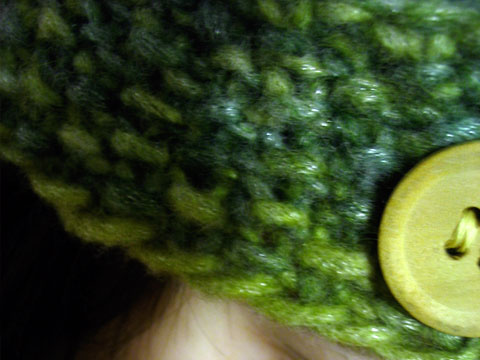 The yarn it shimmers.

Anyway so I spent some time with my friend Joe “AS SEEN ON LAST COMIC STANDING” DeVito the other night and realized that I am incredibly self-conscious (self-deprecatingly proud) about the knitting thing. Like I say “knitting” and then I feel like I have to mention how I do the AARP crossword every day or how I carry Tums with me everywhere because of my bad heartburn. Recently someone asked me what I was doing at the moment and I actually said “knitting my roommate’s boyfriend a sock and missing Jeopardy.” For all we know, from that statement my roommate is my roommate in a nursing home and the boyfriend is a man she met after her first husband of fifty years died. But I mean all that stuff (the crosswords, the knitting, but not so much the acid reflux)…that STILL makes me cooler than like Hannah Montana and texting to vote in American Idol and watching movies on my telephone right?

No it’s not because I had to think REALLY REALLY HARD to come up with just THREE examples of what people are into today. It’s like with every stitch I just go back in time a little bit. Wait, and I’m BLOGGING about this, what the HELL am I talking about???