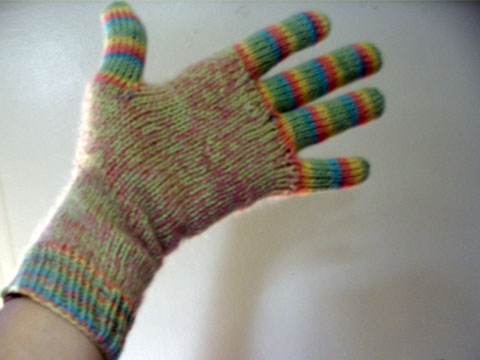 I built some gloves for the winter recently. I consider them “free” gloves because all the yarn that I used was yarn that I purchased and used for other projects.

The body of the glove is comprised of the green Dale of Norway Baby Ull that I used for my Endpaper Mitts. I had a ton of it left over. It wasn’t knitting up thick enough, so I joined it with Knitpicks Alpaca Cloud, two strands. I bought it over a year and a half ago to make Branching Out and for whatever reason I doubled the yarn when I wound it into a ball after finishing it. It was good to use it the hell up, plus it made my glove SO SOFT and the yarn was just the right thickness after adding it.

The fingers and cuff are knit from leftover Knitpicks sock yarn used for my ugly ass Jaywalkers. I had over a ball left over because I bought way too much. I think the yarn knits up much better when it’s striping over a smaller amount of stitches than ugly and varigated over a whole sock.

The Alpaca Cloud is pink and the Baby Ull is green - these are complementary colors, and I was hesitant about what would happen when I used them together. Mixing complementary colors gives a neutral tone and I was afraid I would end up with something vomitrociously close to brown. It really toned down the green, which by contrast made the fingers “pop” because, in addition to being ridiculously bright on their own, they were next to a neutralized tone.

The gloves were not without problems. I still consider myself an inexperienced knitter, so I didn’t pick up enough stitches in the right places along where the fingers join the body of the glove. It’s only a big deal when the gloves are laying flat, which they won’t be when I’m wearing them. 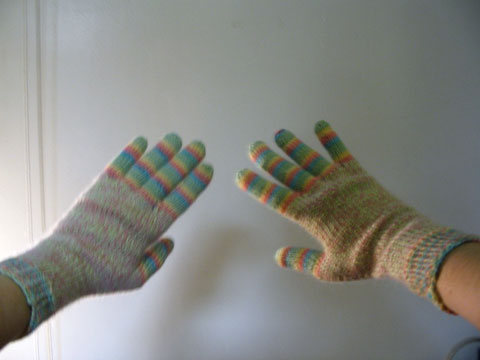 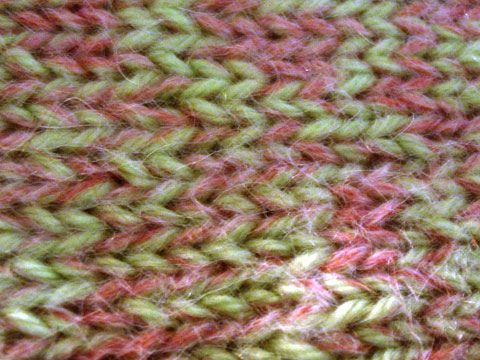 Close up of the contrast between the fuzzy, soft Alpaca and the Dale baby Ull. 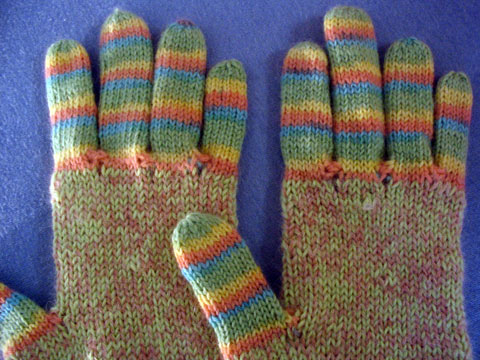