HI HOW IS EVERYBODY? When this knit blog was on LiveJournal I had eighty people who read it. Now that I host my own blog zero people have read it in the past three days. SAD. AND THEN in the middle of me updating this post, my computer fell and now it’s being HELD TOGETHER WITH THE GLUE THAT COMES OUT OF A GLUE GUN. I’ve been waiting for the new Macbook Pros to come out since the summer and now I need one more than ever.

Anyway my camera is out of batteries so I was unable to take pictures of my latest finished object, a heavily modified version of Jodi Green’s Mariah. BUT THERE ARE PICTURES. I made it out of Amherst by Valley Yarns in Charcoal. I wanted a hooded sweatshirt for the fall and that was that. I’m not much into cables so I eliminated those and did it all in stockinette. I also added some garter edging to the wrists of the sleeves and an applied i-cord for the hood in Berkshire by Valley Yarns in a light gray.

I used size 7 needles like Jodi did but when I swatched, my gauge was looser than hers, so I divided the two and multiplied every stitch count in the pattern by that number. I think that’s a lot easier than reswatching on different needles…it’s more quantitative and I’m into that. I omitted the square neckline and couldn’t understand the hood directions so I did my own thing with the hood (grafting the two sides together - unwise!) I ended up with a hood that came to a perfect point and had to sew that down and block it over a bowl to get the hood to look not retarded. I steam blocked the sweater long to cover all of my hips, and also to even out the back, as the decreases before the hood caused these like bulges which is not an isolated problem, according to one knitalong. Zipper installation was easy and it only looks sloppy on the inside but I can cover that if I so want. So far the sweater is extremely warm and it fits flatteringly and I love it. The things I would have done differently are a looser applied i-cord, would have been more precise about the hood, and shorter sleeves by about an inch. I also think maybe the hood is a little short because there isn’t much “give” but that’s not such a problem. This was my first sweater! 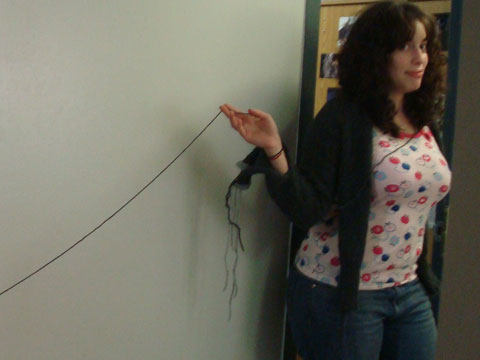 This is me trying it on before seaming, before I started the hood but after I completed the yoke. I was so excited that it fit that I ran to find my roomate, forgetting there was an entire ball of yarn attached to me. My roommate had me pose with the yarn. Chic! 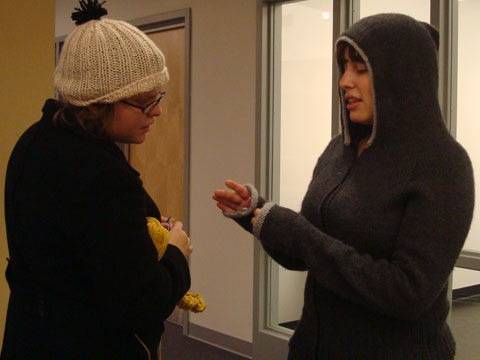 This is me with Mariana, the head of the Fine Arts Organization on campus. We were at the installation of a sculpture show that I helped organize and am participating in. She knit the hat that she is wearing. I was talkin’ sleeves. 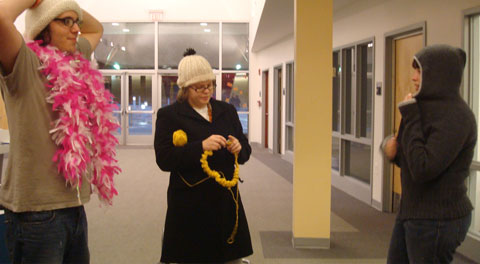 TRIANGLE OF YARNSTUFF. To the left is Mariana’s boyfrined Nick in a seed-and-stockinette hat (also, note the boa. We were breathing in feathers for hours.) Center: Mariana works on a blanket. Right: Me in my friggin hoodie.