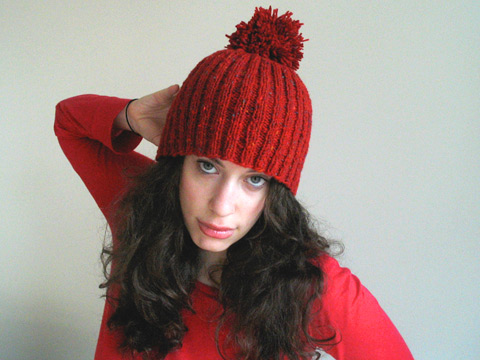 I hold grudges and I don’t believe in second chances. At the end of 2006 my brother wanted a red hat with a pom pom so I knit him one and he lost it before it even became like 2007. He also acted like it was his right to lose it and kept asking for another one for years even though his attitude about the first one felt very, “whatever, you shouldn’t have knit me a hat in the first place if you didn’t want me to lose it.” Also, he has a habit of losing or getting mugged of all the gifts I have showered him with. Then I spoke to my dad on the phone a month ago and he confided in me that my brother was actually very upset about losing the original hat and I felt so sad because my brother is like my project and I always want to take care of him! So I went against my beliefs and knit my brother ANOTHER RED POM POM HAT even though he is not learning a lesson here! This hat is knit in red Donegal tweed that I got at a yard sale. You can barely see the tweed character in this photo because red is hard to photograph AND Portland only gets like 15 minutes of unpredictable sunlight per day. So I AM SORRY that this photo looks the way it does because I had to make it work in Photoshop and it’s very easy to not be subtle with that program.