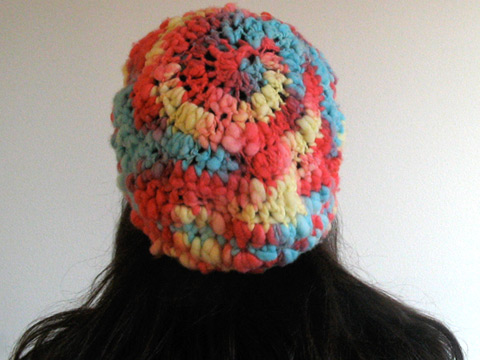 I wanted to create something ugly. There was this inhibiting perfectionism in my system and I felt the only way to let go was to make a most hideous accessory and be proud of it. It looks like a bad tye dye hat made entirely of bobbles.
The yarn is a homespun thick-and-thin but mostly roving regrettably dyed with primary colors atrocity I picked up at a yard sale. I originally wanted to make felted beads out of it and because it’s dyed with primary colors I could effectively get all the colors of the rainbow out of it. Felted beads is still an option as I would have no problems unraveling this hat if I don’t decide to leave it behind at a hipster location in my neighborhood as a joke. I decided to work in crochet, as I feel that it’s very “forgiving” (imprecise).

I debuted this hat at my party last weekend as part of a discussion as to whether crochet is ugly (THIS PARTY ROCKED?). My position was that in general, crocheted garments are ugly because a crochet stitch has too much going on and that it’s best suited to borders, finishing, and afghans. Imagine a sewn garment made only of trims. To prove my point I modeled this hideous hat and it was declared that this is not representative of all crochet. 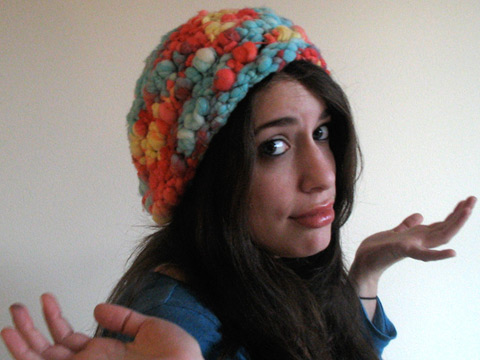