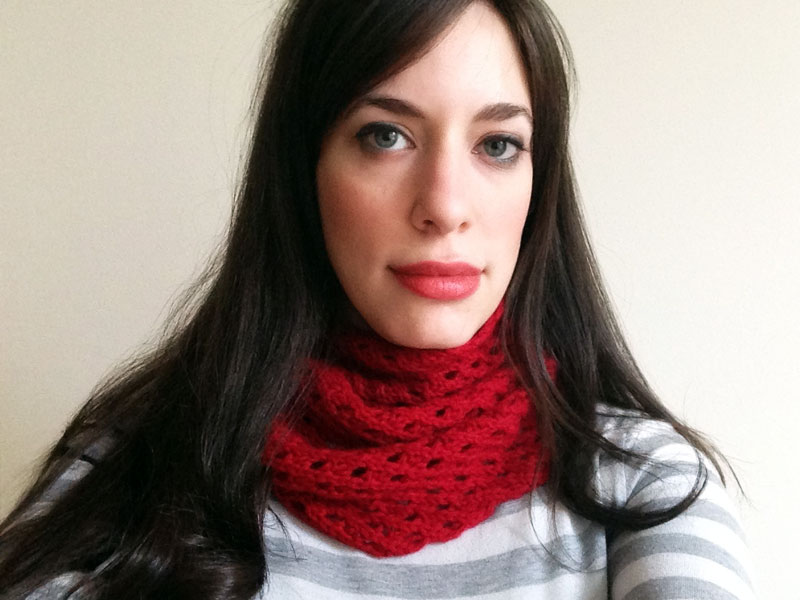 Cowls. They’re everywhere, right? Here’s a cowl of mine I’d like to share: The Bethesda Cowl. The pattern incorporates elements of lace and cabling and is very simple. I’m not sure if anyone has designed anything like this before, so forgive me if it’s been done! Skip to pattern.

This is NOT a fun knit. It’s a row of k2tog, yo which is as fun as it gets. Then it’s a purl row. You know how purl rows are never as fun as knit rows, right? Then it’s a row of cabling, and that’s even more awkward. And then it’s another row of purl! This cowl is work.

And now, the fun part. The cowl is named the Bethesda Cowl because I knit it while watching HBO’s adaptation of Angels in America. Twice, with no respite. If you’ve spoken to me in the past few weeks I’ve probably already enthused evangelically about how deeply it touched me, and how I’ve been trying to stave off watching it a third time by reading synopses and analyses and watching Munich (also written by Tony Kushner) and Wit (also directed by Mike Nichols and starring Emma Thompson).

I’d been meaning to watch Angels for about six years since Netflix noticed I’d been consuming the entirety of Al Pacino’s filmography interspersed with a lot of films about AIDS. I’m not going to say I’m OBSESSED with AIDS, but I am interested in the epidemiology of it. I routinely re-read the original 1981 New York Times article breaking the story about the prevalence of Kaposi Sarcoma among gay men in New York and San Francisco, usually accompanied by a lachrymose viewing of Longtime Companion every few years.

But that’s not what this is about. This is about Tony Kushner’s Angels in America, this is about why I called the cowl Bethesda. In the context of Angels, Bethesda refers to several things. Bethesda Fountain in Central Park is the protagonist’s favorite part of Central Park. According to the epilogue, Bethesda is an angel who descended in Jerusalem, and where her foot touched the ground, a pool appeared that heals people of their pain. Bethesda, Maryland, is also the real-life location where Roy Cohn, whose persona was adapted to the play, died of AIDS, and it is also where Joseph McCarthy, whose persona is also important to the play, died as well.

These are all of course very basic elements that can make up any play, and I haven’t gone into any depth as to why Angels meant so much to me. One of the overarching themes of the play is change. The protagonist rejects the idea that stasis is bad by rejecting the prophecy given to him by the Angel of America. The play itself rejects the idea that stasis is bad by eliminating the characters who have not changed from the epilogue. Each character struggles with something inside them that they can’t change. It made me consider all the worst parts about myself, the things that sometimes make it hard to get out of bed even when I am living the life I envisioned for myself, and while the play’s message hasn’t given me courage to stop ruminating about all the insecurities and the selfishness, I do feel a great deal of empathy for all the characters.

And so, the Bethesda Cowl. I’d like to believe that the cabling and yarn-overs emulate the ripples of the Bethesda Fountain or the spine in the wings of the Angel of America as a reference to the play or the miniseries or the mythology. But really I’d like it to commemorate how deeply this play adapted to an HBO miniseries has affected me. 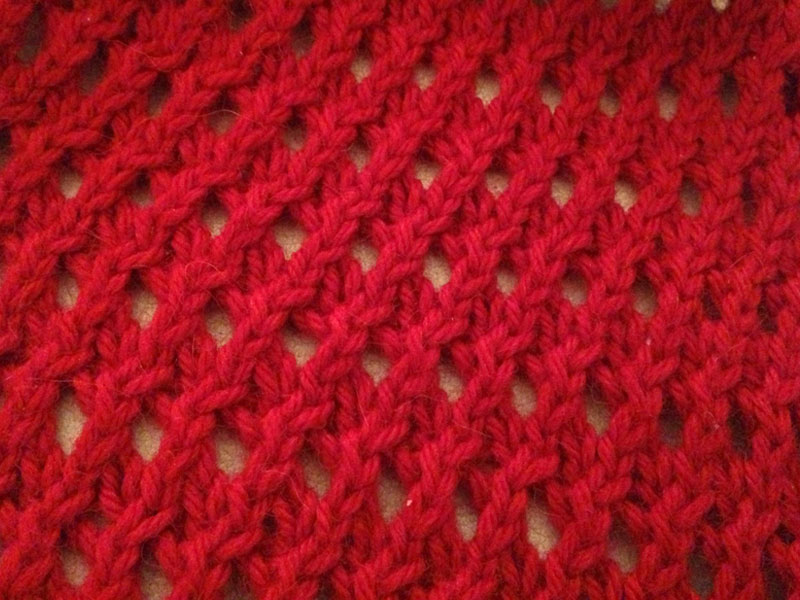 Repeat the above 4 rows until you reach 19 inches of knitting. Bind off and block firmly to add length and width to the cowl and to open up your yarn overs.

Slip the stitches held on waste yarn and the stitches from the provisional cast-on onto needles; graft together using mattress stitch intended for bind off and cast off edges , being careful not to twist. You can graft the cowl together first and then block it as I did but prepared to spend an entire day waiting for the thing to dry. 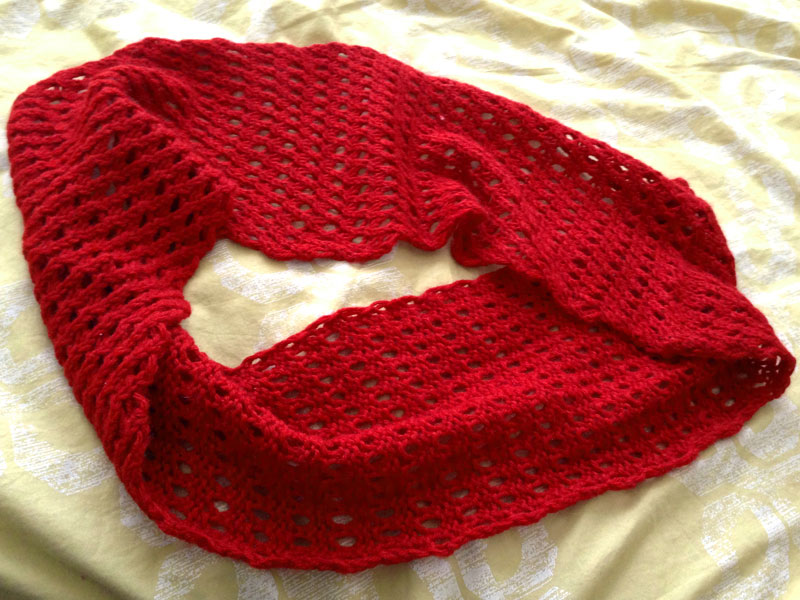 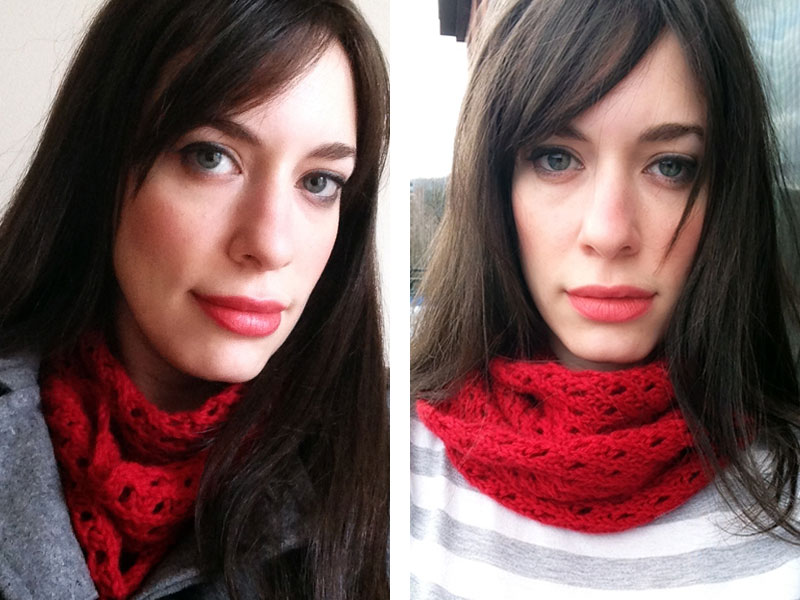