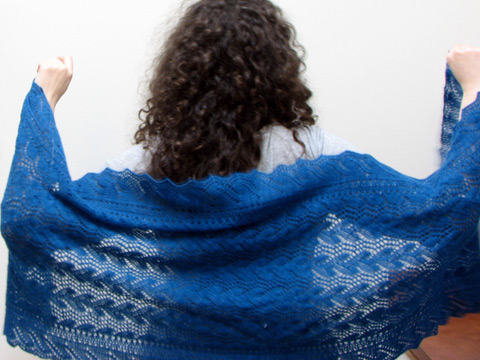 THIS is the Print O the Wave Stole by Eunny Jang. I’ve been meaning to knit this in Malabrigo Lace since 2006. In fact, I did knit it in the late spring of 2007, (in the Marine colorway of Malabrigo Lace) but after I grafted the two center panels together, it was too tight and it ripped. When I attempted to salvage it six months later, it was too late and I recovered as much of the Malabrigo as possible, paired it with some Knitpicks Shadow, and made a scarf. I still wear the scarf!

I actually finished this over the holidays, but was set on photographing it by natural light but Portland got only 25 minutes of sunlight all month and unfortunately I missed all of it. These photographs failed to capture the gossamer-like drape (how could you possibly? I took over 300 BLURRY photos) and the slight tonal variegation of the yarn, not to mention it’s actual color, cerulean. It hurts. 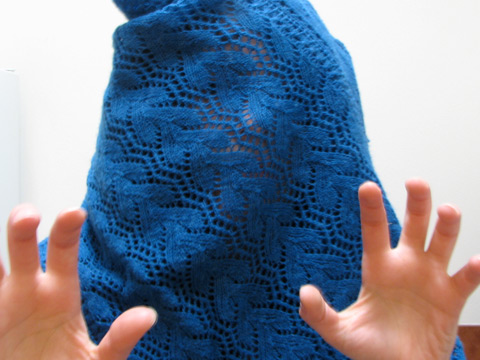 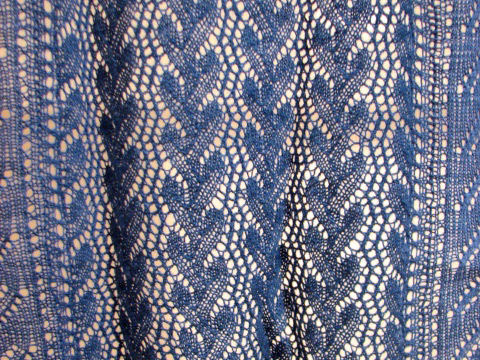 Not at all the color of the yarn, but this photo shows stitch definition.

This is a beautiful, but difficult pattern. I had a lot of trouble with the first repeat when I knit it back in 2007. It wasn’t so bad this time around, but I would recommend counting stitches every row at least until the pattern emerges in the work and becomes intuitive. I opted not to knit the center panel in two pieces and graft them, in part because of what happened to me the first time, but because upon browsing other completed stoles, I didn’t like that the pattern didn’t match up perfectly in the center, and that there’s like this SPINE (well, it’s a seam) where the two panels meet. I just don’t care for a seam running down the center of my work; I’d find it more distracting than the fact that the waves only run one way. There is always the option of knitting the center panel in one piece and simply reversing the direction of the chart halfway though to create a symmetrical look AND eliminate the seam, but that didn’t occur to me at the time. WHAT’S DONE IS DONE PEOPLE.

I made picking up 640 stitches for the inner border easier on myself because when I knit the center panel I slipped the first stitch of each row, like when you’re knitting a scarf and you want the edges to be neat, or when you intend on seaming an edge. The only thing to beware of at that point were the two rows per pattern repeat - 68 stitches in total, that began (or ended, which mattered when picking up one of the sides of the stole) with decreases, and could not be slipped. I did place markers every 20 stitches to keep track, though, so that when knitting any of the following four border rounds, I was able to increase to reach the proper number of stitches. I only missed four out of 640 stitches!!

The edging was extremely difficult to begin. I’ve never done edging before! I had several false starts; then I got a few repeats done and realize I was knitting it backwards - the inner part was on the outside and the outer part was facing the center panel. THEN I knit it backwards AGAIN - this time, the purl side of the edging matched up to the knit side of the center panel (which the instructions actually warn about, but it’s the last sentence so I missed it). The solution was to knit it BACKWARDS, this time meaning that instead of knitting around the shawl counter-clockwise, I needed to pick up the stitch BEFORE the stitch I was picking up, and knit around the shawl clockwise. So that is three distinct ways of doing things backwards! I do wish some more detail regarding that step was documented in the pattern, but I didn’t find much online about people having trouble with that step so I guess it’s only me. Once that became apparent the edging was extremely easy and I had the lace pattern memorized half way.

In the end, a beautiful blue stole with a gorgeous drape! I feel like I’ve leveled-up in knitting having completed this project which eluded me for so long. 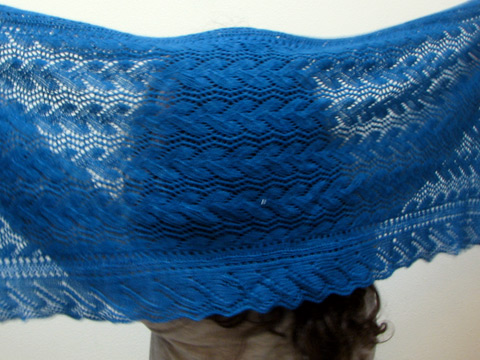 Attempting to show the drape but it would take a very fast shutter speed and more light to achieve that. So blurry! 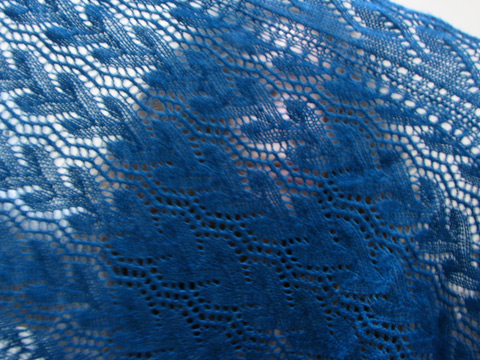 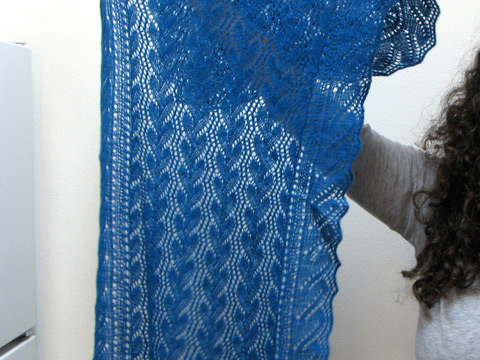 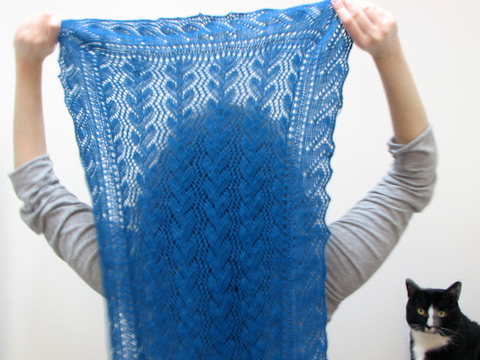 This is actually a picture of a cat. So is this: 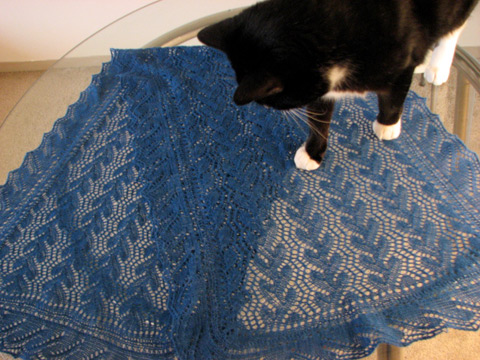